The Secret Life of Puppets 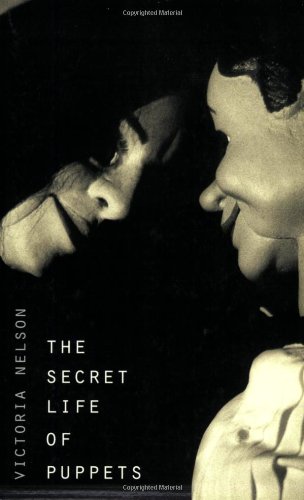 The Secret Life of Puppets is one of the most important and inspiring books I’ve read in many years. Ranging widely in the imagination of Western culture, it shows wisely how the human soul went into eclipse, where it remained hidden, and how it might return. The language is fresh, the ideas original. Each page has at least one summary sentence, beautifully compact, that offers a way out of the scientism and displaced notions of transcendence that have chased the life out of modern experience. Drawing on a largely neglected tradition of Neoplatonic and magical thought, it opens up key themes of religion and literature that lie hidden in popular culture and high art.

–Thomas Moore, author of Care of the Soul and The Soul’s Religion

Some books are fated and feted for cult status. They have a particular feel and fervency about them. The Secret Life of Puppets by Victoria Nelson, a writer on writing…seems like one of those uncanny, unclassifiable books that break the mould and promise to have a market appeal across disciplines and hobbies, among sober seekers after enlightenment as well as cranks…Nelson’s breathtaking jaunt through the underground of Western culture is certainly illuminating and sometimes intoxicating…Expertly researched, forcefully written, magnificently produced, The Secret Life of Puppets is a haunting, highly charged book that leaves a strong after-image of worlds within worlds.

My Book of the Year: The Secret Life of Puppets explores the hauntings, possessions, and other uncanny phenomena proliferating in literature and entertainment (and by no means only on the margins); she argues strongly, through vivid and original readings of H. P. Lovecraft, Edgar Allan Poe and many artifacts in a variety of media, for a new approach to the uses of fantasy and to the relationship between material and immaterial phenomena.

In a remarkable scholarly book, The Secret Life of Puppets, Victoria Nelson argues that our sense of the supernatural and yearning for immortality has been displaced from religion to such expressions of popular culture as superheroes, robots and cyborgs.
–Francisco Goldman, New York Times Magazine

This is no ordinary work of intellectual history…This is New Age prophecy at its most verbally sexy and literarily savvy. It is fun, enticing, and chockfull of brilliance.
–Laura Bass, Washington Times

Much more than intellectual history and literary criticism, Victoria Nelson’s The Secret Life of Puppets is a provocative, important and exciting thesis about why organized Western religion is no longer the residence of religion. In a convincing series of essays, Nelson demonstrates how the sacred and our yearning for the transcendent has now reappeared in art, film and all manner of simulacra–yes, and even in puppets. This is required reading for any serious student or teacher of religion.

–Rabbi Lawrence Kushner, author of God Was In This Place and I, I Did Not Know, Invisible Lines of Connection and other books

A wonderful, unlikely, necessary book which links high and low and pop culture, the sacred and the profane, into a magnificent webwork of pattern and gnosis–it is erudite, irreverent, and profound. Just read it.

Nelson has written an eloquent, exciting, memorable, important book. It is alive and disturbingly truthful.

–Harold Bloom, author of The Western Canon and Shakespeare: The Invention of the Human