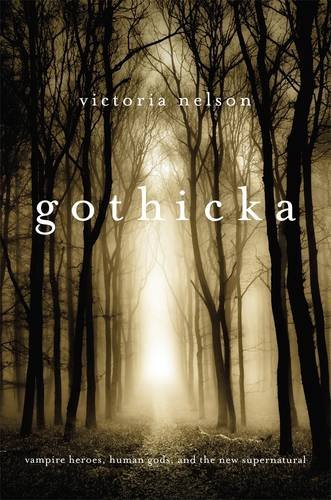 Where else can Vijay Mishra’s The Gothic Sublime trade shadows with Stephanie Meyer’s vampires and Guillermo del Toro’s grotesqueries except in the mysterium tremendum of Nelson’s astounding Gothicka? A book of delirious erudition that establishes the Gothic at the heart of our civilization and then proceeds to trace in our vampires, our saviors, our zombies, our medieval conspiracies, our superheroes, and our monsters how the contemporary Gothic is shedding the dark supernaturalism of its origins, a brightening that not only reveals our present obsessions but also seems to portend the dawning of a new kind of post-Christian spirituality. Provocative, forward-looking and masterful.

-Junot Diaz, author of The Brief Wondrous Life of Oscar Wao and This Is How You Lose Her

This is an admirable, strong, and original book, a worthy sequel to The Secret Life of Puppets. Nelson’s prose is clear and restrained, very winning and illuminating of the dark corners in 21st-century America and beyond in a stricken world. I can think of no rival works this substantial.

-Harold Bloom, author of The Western Canon and Shakespeare: The Invention of the Human

With this brilliant encyclopedic study of gothic literature, film, and culture, Nelson continues the exploration of the gothic she began in The Secret Life of Puppets. Although (as she states) she does not try to survey, or position herself within, the area of gothic scholarship, her scholarship is solid . . . This is not dry, difficult reading; the book can be enjoyed by anyone interested in the gothic, including aspects of it that have not been extensively explored. Nelson focuses mainly on 21st-century examples, while providing an excellent background of earlier works and connecting them to contemporary works in unusual ways

Gothicka is a spirited and illuminating successor to Nelson’s highly original previous study, The Secret Life of Puppets. It picks up on many of the lines of thought in Puppets and applies them to opening up some of the most successful books and films of the last three decades, works which, while being read by millions, have not received much critical or scholarly attention. Nelson is preeminent in her knowledge of this field where the study of contemporary religion fuses with mass media and bestseller culture, and Gothicka is a terrific, original, eye-opening, and entertaining work.

There are other books in the field of religion and popular culture, but none really do what Nelson does, that is, point out that strictly secular, Marxist, materialist, or psychological readings will no longer do. This is the real genius or daemon of this book. Nelson’s voice is without peer in this domain? she is carving out a most unique and most brave stance.

-Jeffrey J. Kripal, author of Mutants and Mystics and Authors of the Impossible